With the release of Windows Server 2012, Microsoft introduced a major overhaul of Server Message Block (SMB) networking. The result of this was many new capabilities were introduced:

For the purpose of today’s post though, I will just focus on SMB Multichannel, which provides bandwidth performance improvements without needing to set up NIC teams in Windows Server, and doesn’t require switch configuration either. It means you can get near linear scaling by adding more NICs, and even in my home environment I can leverage this capability for large file copies across the network, from my Windows 8.1 dual NIC workstation.

In the image above, you can see that I’m way above the bandwidth provided by a single GbE adapter, and am much closer to what can be provided by two adapters. This is SMB Multichannel in action. 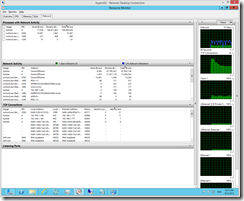 If we take a look in the above image, you can see the breakdown of the traffic, and you can clearly see that there are two streams for the single file copy process, which is almost doubling the throughput versus a single adapter.

Granted, most people aren’t working on dual NIC workstations, and most of the time the benefits won’t be so great for an individual user scenario like this, but it certainly helps me feel better about having my house rewired a few years back, on the assumption that wireless network would never (okay, in the short to medium term) be able to handle my needs.