The last post on Admin Center changes highlighted some of the upcoming features that are showing up in preview in the Microsoft 365 Admin Center, and this post is a good follow up post to introduce other recent changes that may lead you outside of the current Admin Center for now. In this post I’ll discuss several of the recent announcements around Office deployment, including removing MSI based installs automatically, deploying Microsoft Teams instead of Skype for Business, the Office Customization Tool , and the move to 64 bit default installs.

Let’s start off with the one that I’ve seen the most enthusiasm for – the ability for the current MSI based Office installation to be removed as part of the Office 365 Business deployment. While there have previously been various scripts available to perform this task, you needed to run them before attempting to deploy Office via Click-to-Run (C2R), otherwise the new install would fail.

The options that we are provided here are to select a group or multiple groups to target for deployment.

The two deployment options we have are to install or uninstall Office. Even as recently as a few months ago, this really was the right set of options, because some of the things this post covers, such as the removal of MSI installs automatically, was only added to C2R deployments in the last few months. The guidance from the Microsoft 365 Business team for deployments including uninstalls of the MSI version was to remove the MSI version first, which was the approach that was required at the time. If you add the automatic deployment of Office C2R via Windows Autopilot to a new PC scenario which featured prominently with the early Microsoft 365 Business content, again this was the approach that made sense.

If we jump into Intune’s client app settings via https://portal.azure.com or https://devicemanagement.microsoft.com we can see that we have the option to remove MSI based version of Office exposed with a Yes/No selection, so it really couldn’t be much easier. However, if you are working in an environment where internet bandwidth isn’t going to cope very well with an Office C2R deployment via Microsoft’s content distribution network, you need to look at a few other options. The first option is to use the new capability of the Office Deployment Tool, which supports the following entry for removing the MSI based installs.

As it suggests, this will remove all of the MSI installs, which could include Visio and Project in some scenarios, but we can keep those if needed with the following.

In this example, MSI installations of Visio Pro won’t be removed, and you can have options for Visio and Project, both Standard and Professional versions. 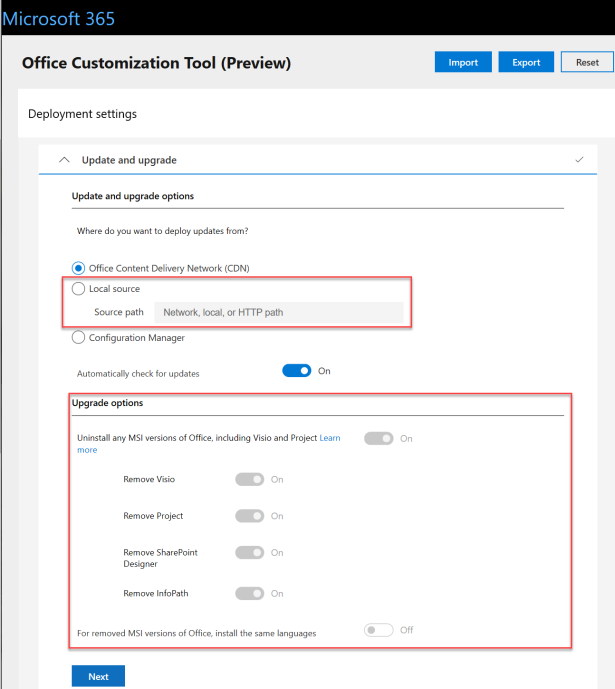 A new option that is available in preview is https://config.office.com, the Office Customization Tool. It allows you to create and edit the XML files with many more capabilities exposed for ease of use, including deploying from a file share, and some more granularity around the MSI uninstall options. Another important element of this tool is that it’s functionality is already exposed to Intune and Configuration Manager, where they will provide a curated experience over the selections they choose to expose in their own consoles.

One of the things that worth highlighting is that you will see references to Office 365 ProPlus in Intune, you can safely ignore those, this is the location for deploying Office 365 Business as well. Some of the options, such as Shared Computer Activation only apply to ProPlus and not Business, but otherwise you shouldn’t see any issues from this.

The next recent announcement, which kicked off on October 1st, is that Microsoft Teams is now the primary client for meetings and calls, replacing Skye for Business in new tenants of 500 seats or less. What this means is that for Office deployments in new tenants, again you should look into Office deployments via the Intune console. Select the components you want to install, but make sure you leave OneDrive (Groove) and Skype for Business deselected.

This means that you need to deploy Microsoft Teams, and for this you have a few options to consider – do you want to do it manually via Intune, which isn’t a bad option, but if you want to automate the process, and start scaling out across multiple tenants or editing the file to add multiple MSI deployments to a tenant., you should take a look at the Line Of Business deployment script on GitHub.

As of the time of publishing this post, you just replace the section at the end of the script so that it looks like the following.

This brings us to the final piece for this post, which is that the Office team are now recommending 64 bit as the default deployment option. The wording from this docs article is “We recommend 64-bit on computers that have 4 gb or more of memory. But you should assess application compatibility and other factors that might require you to use the 32-bit version.”. Installing 64 bit Office Business Premium onto PCs that don’t have office installed is easy to do from within Intune, but make sure you have a good understanding of what add-ins and controls may be in use that don’t have 64 bit equivalents, as well as a few other considerations that you can find here.

When you add a new Office deployment in Intune, it’s just a matter of selecting the right version under App Suite Settings. This will not uninstall a 32 bit C2R install, but the likelihood of needing to replace a 32 bit install with a 64 bit install is quite low. You could use the Microsoft 365 Admin Center to uninstall the existing deployment, and then redeploy with the new app profile.